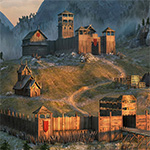 This time we will be talking about some matters that probably weren’t on your mind. It’s all related to the fact that Flash will soon be disabled completely. Flash is dead but Taern is not! Let’s also see what’s going on with the Vorling event. Halloween and the Hussar Hetman are coming. A cherry on top – concept art and plans for guild buildings in BR. Read on!

You’ve been asking many times: ‘What happens to Taern when they turn off Flash?’ To face this inevitable problem, Drygu has sat down and prepared a client for the current version of the game. All you need to do is download it, install it and viola: you can play Taern to your heart’s content. 😉 The standalone version is currently undergoing tests and will be released with the next update. Don’t worry, Drygu made sure that he’s not blocking anyone else’s work so this will have no impact on the release date of Broken Ranks.

The main advantage of the standalone version is stability. Over the last couple of months (or even years) FlashPlayer tended to cause some unpleasant surprises. After browser updates, it wouldn’t run unless we click through 5 windows. Then it assaulted us with a black screen for unknown reasons forcing us to restart the browser. In addition to that, when minimizing the browser window or changing to another tab, it would slow down 10x which could kick you from the server during combat. The standalone version should be free of all these issues. It should also run at a stable 30fps even when there are many players on screen. 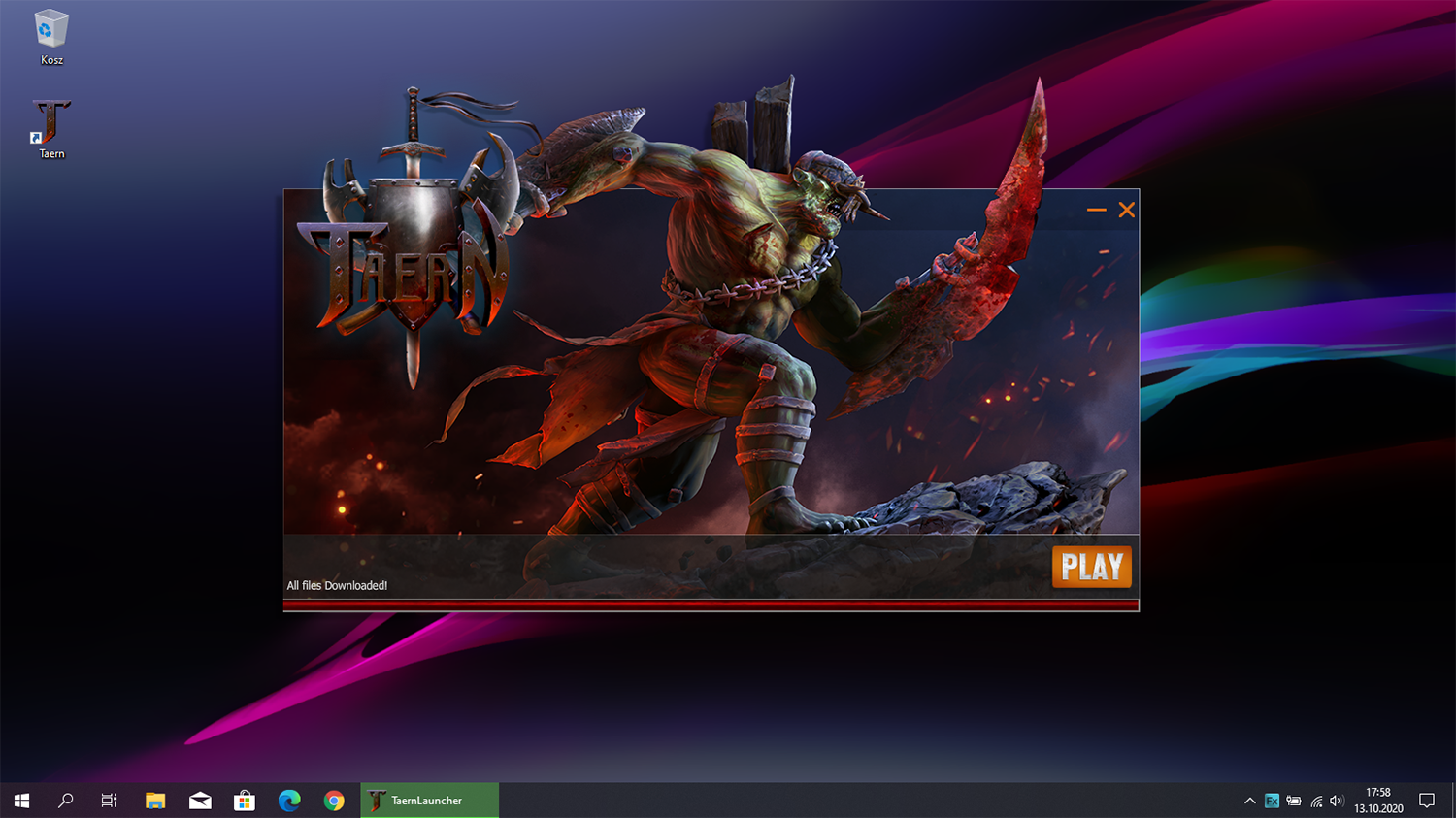 You’ve been asking about the Vorling event quite frequently and it’s no wonder why. It’s a unique type of activity, good xp, and items that you can’t normally get. We’ve already said that it’s not possible for us to optimize the event as far as performance goes. We’ve also mentioned that if we decide to no longer enable it and it wouldn’t be transferred over to Broken Ranks in its current form, we would find an alternative way to use pieces of power and Mortus.

It’s true that we wouldn’t like the effort put into the event to go to waste. So we had a choice: either give Mortus his “true death” or think about an additional activity that may not be a multi-person raid but it’d allow allow you to kick the wraith’s butt and get some rares. We chose the second option. 😉

At the moment we are thinking of making Balor, Dolor, Mook and Morbus (minibosses in the current version) into champions that spawn on the map like other champions do. They would be the guardians of the recipe needed to enter Mortus’s dungeon. We’ve also thought about giving pieces of power to current bosses (levels 85+) that would also allow you to enter the instance. Whatever we do, we don’t want Mortus to be mercilessly farmed. He (as well as the item market) needs to have a breather from time to time too 😉 Of course much can change still – these are just the things we’re considering… We may also add some alternative payments (apart from pieces of power) to the NPC that transports you to the wraith dungeon. And what about exchanging pieces of power once Mortus is defeated? It’ll probably stay as it is but we’ll need to update the NPC a little. If you have any ideas of your own, please comment here. 🙂

We hope that also this year you will help damned souls atone for their sins and be redeemed at long last. The exact date of the event will be revealed later on.

As far as levels go, nothing changes: you’ll be able to have fun in 4 levels ranges: 1-40, 41-80, 81-110, 111-140. There may be some changes to where and what mobs spawn. Due to the fact that there might have been not enough mobs last year, we’ve decided to add some more at the higher level ranges. If you’ve never taken part in the event or it was a long time ago (or you simply don’t remember), a little reminder will be posted later on the forums 😉

You’ve been asking a lot about the next update and what we’re planning to implement. It’s no wonder, we’re going to add many new things and it’s easy to get lost, so we’ve decided to do a little summary. We don’t have a release day yet but (if nothing unexpected happens) we want the update to happen within 4 weeks. We’ve decided to summarize the matters we described in the previous post and are on our mind in the context of the next update. Below is a list of approved changes as well as those awaiting some fine tuning and approval.

Some other updates that are not approved yet but which we’d like to implement:

Do you think any other set bonus should be changed? We’re open to suggestions.

We’ve only been dealing with very important issues so far so let’s loosen the atmosphere a bit. To celebrate the release of the standalone version, we’re thinking of giving you a new skin as a gift. Stay tuned for the concept art of the item! 😉

As you can see, the Dev Blog is now available in English as well. We’ll try to release is together with the Polish version. Cross your fingers!

As far as work on Broken Ranks goes, we’re still waiting on feedback from Try Evidence so that we can deal with the most problematic issues, which means we’ll be coming even closer to actual playtests. Today we’re going to focus on something that a lot of you are probably interested in: how Guild Headquarters are shaping up.

Guild Headquarters are ones of the most visited placed in Taern. Teleportation, buffs, deposit, pets – the reasons are many. As we mentioned in previous posts, the work on the art is still going on. We want this important game element to be visually impressive and easy to use. Some concept arts are already fleshed out. These are not final versions yet but we’re coming closer to finalizing them.

The first thing you see when you enter the headquarters is… how the headquarters look. 😉 Building sites and their levels are visible even in 2D and it’s not something we want to abandon – your headquarters will be looking better and better as you upgrade your buildings. 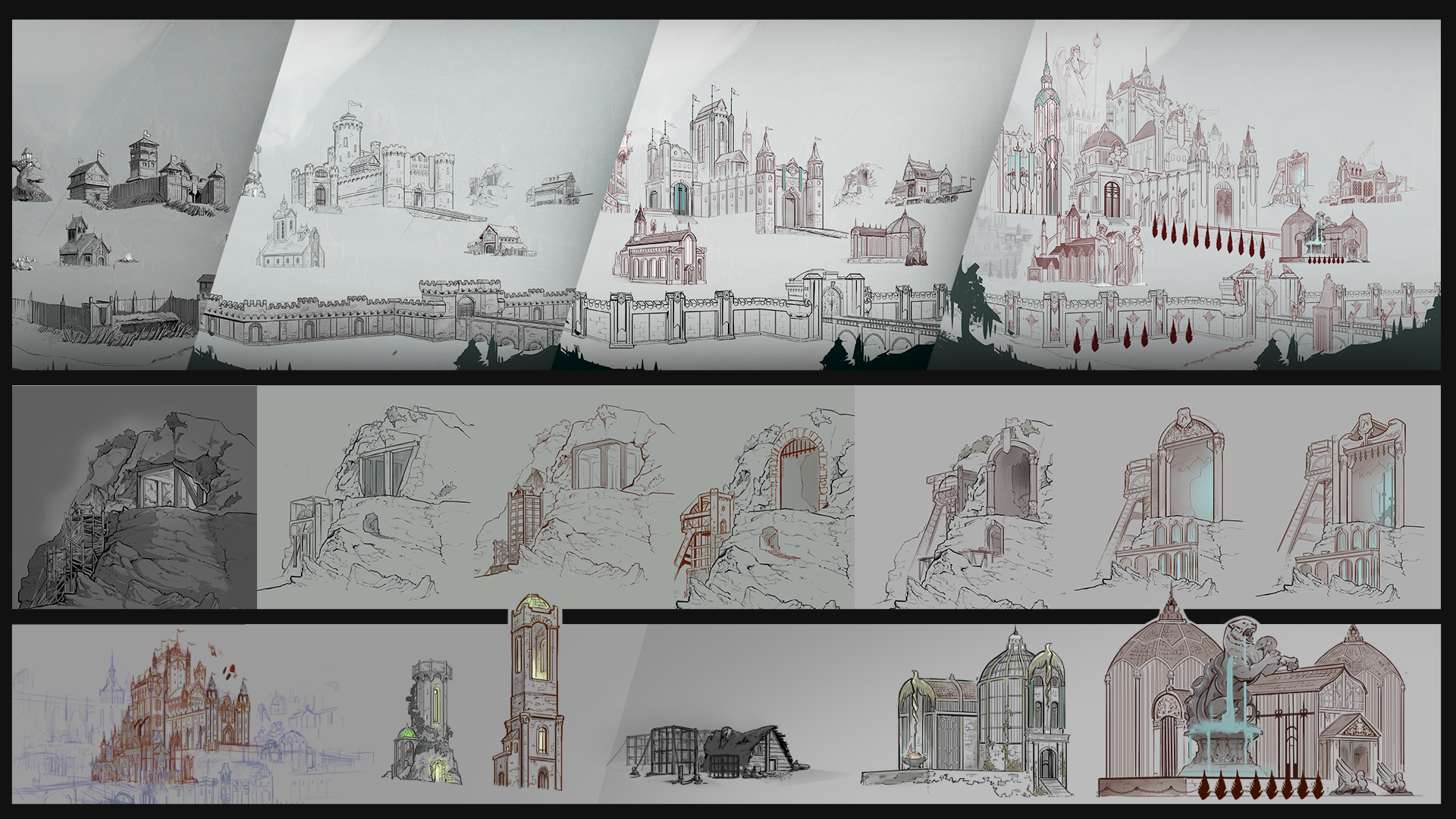 However, this will no longer be a flat drawing but a deep, three-dimensional image that you will be able to admire no only from the front. 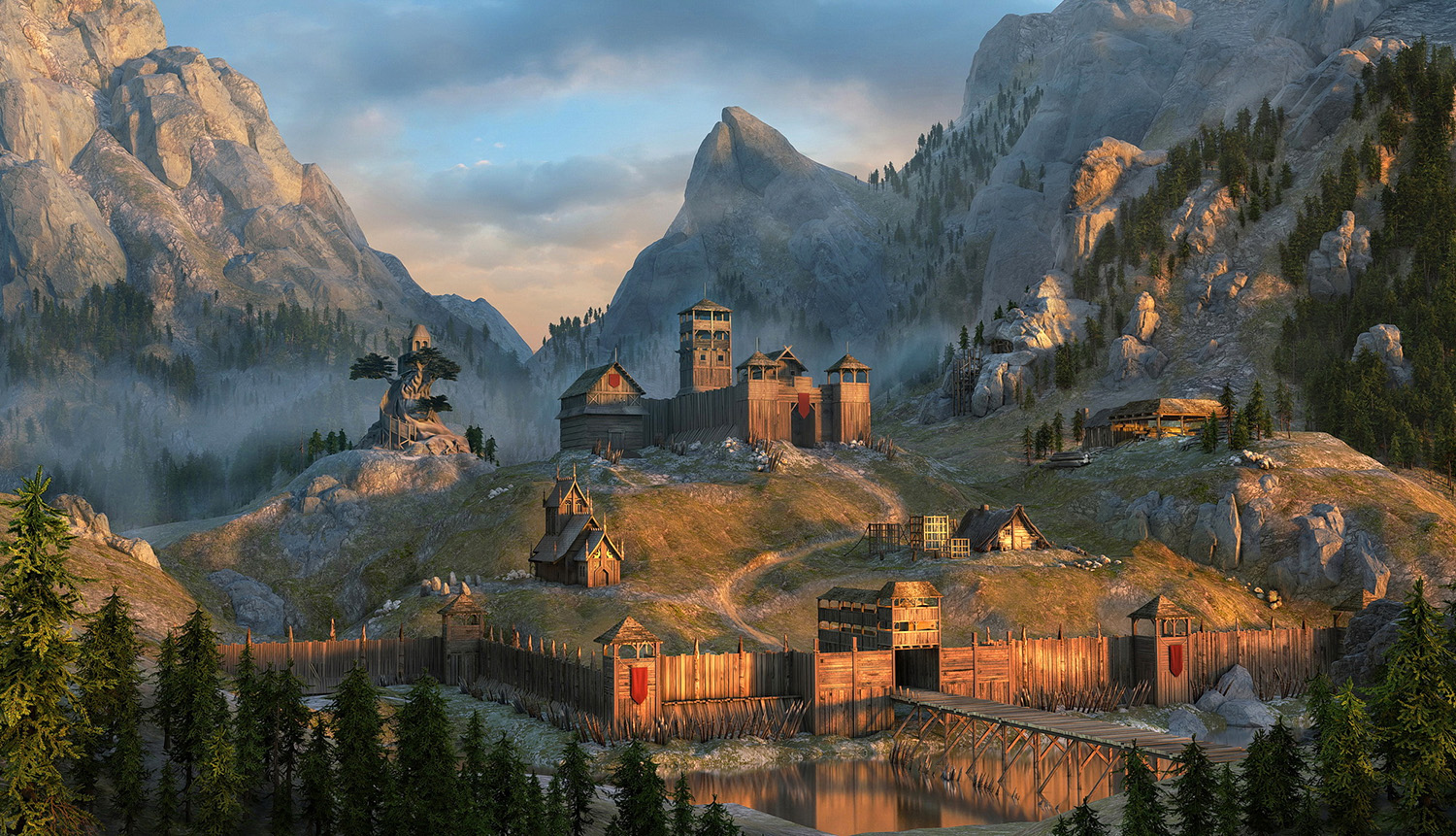 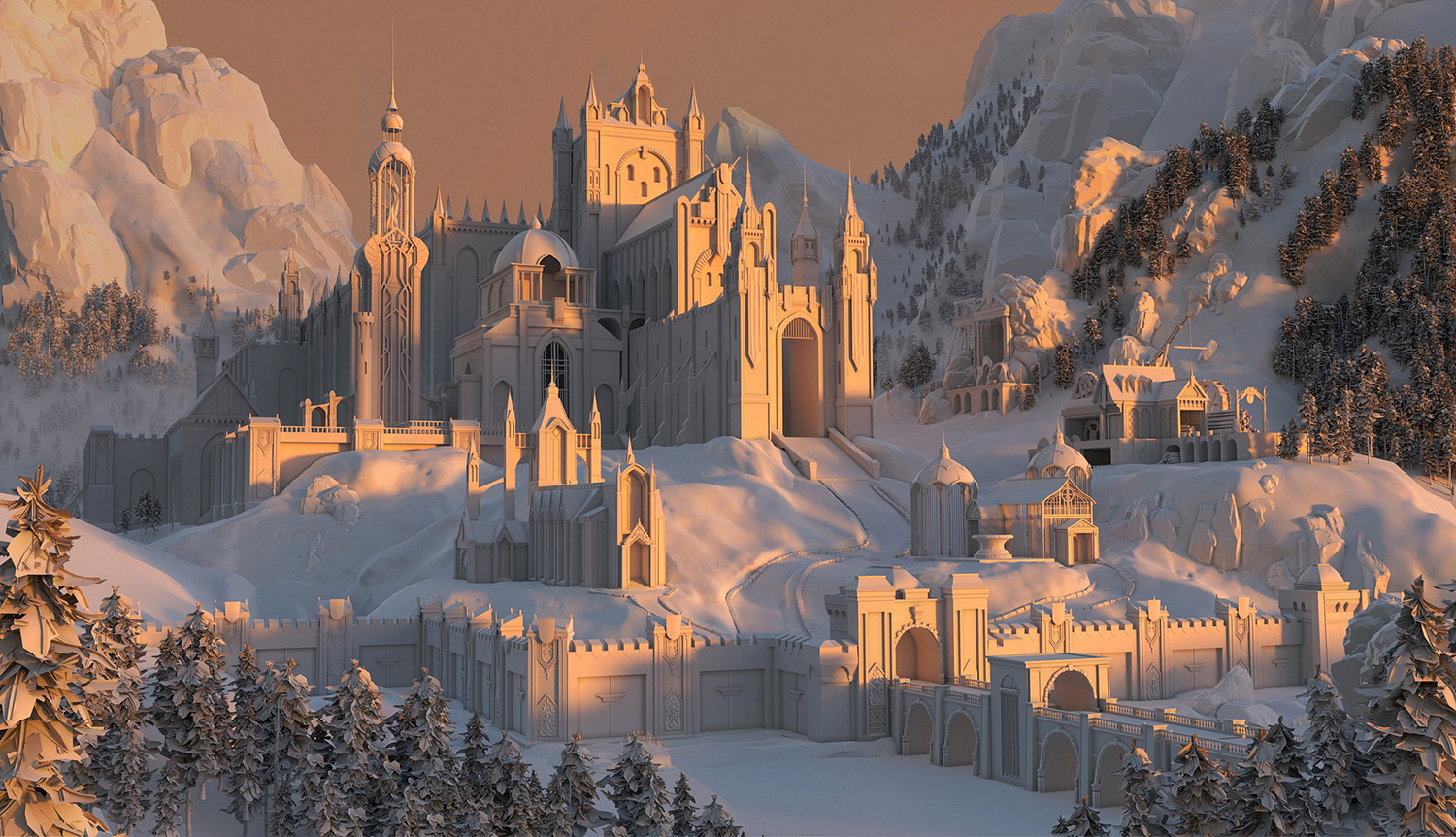 The temple of blessings looks completely different now. We’ve decided to step away from the shop-like appearance in 2D and make it look like a real temple with an atmospheric interior and the statue of a goddess. A very important element is the buff placement – we want to make it as clear as possible but at the same time they need to fit nicely into the grand whole. We’ve had various ideas: 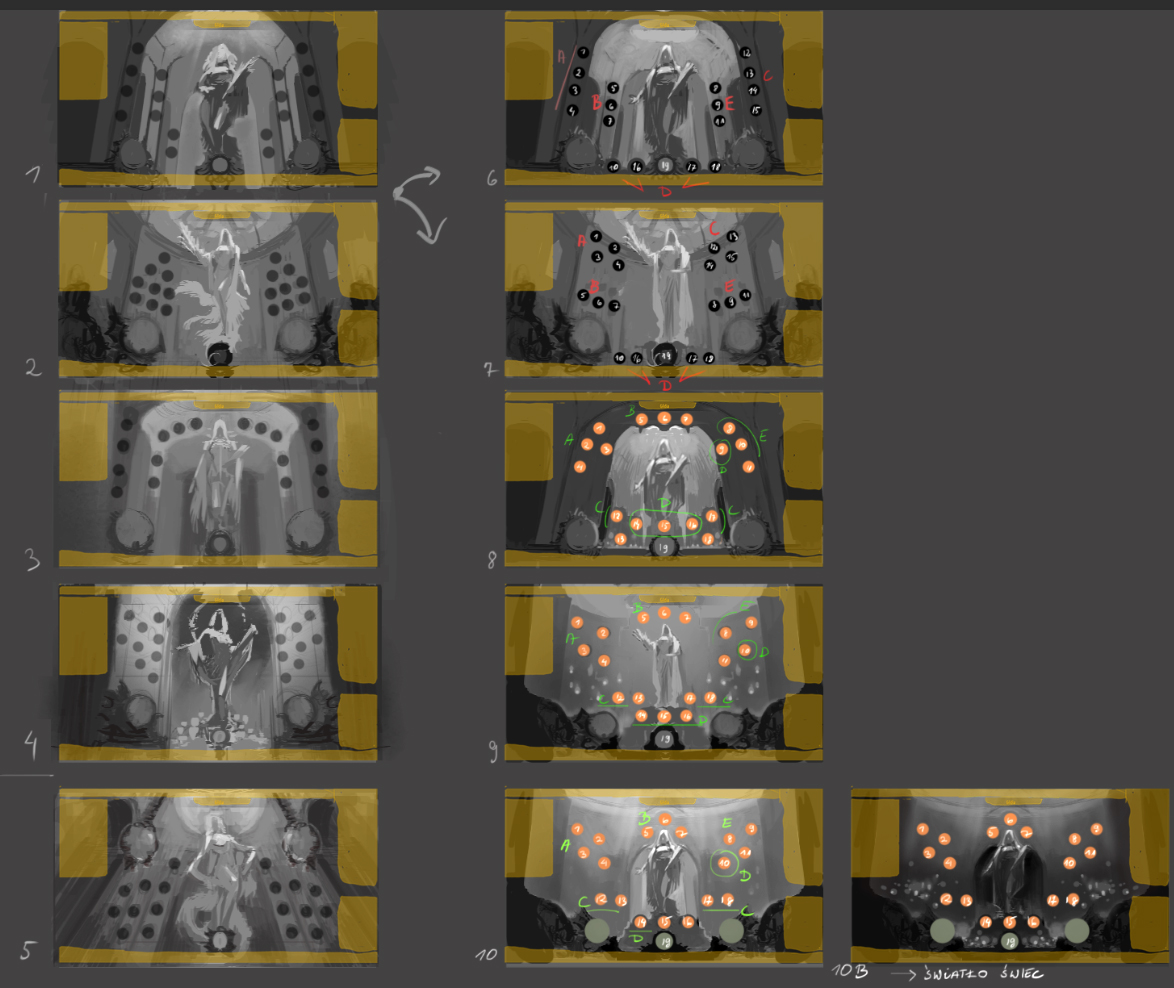 The statue also moved a couple of times. The general idea needs to be fleshed out with details. The appearance of the goddess, her hands, clothes, hair, held items – these will need to be tweaked still. The final version of the statue is not yet chosen but you must admit it’s not an easy choice. 😉 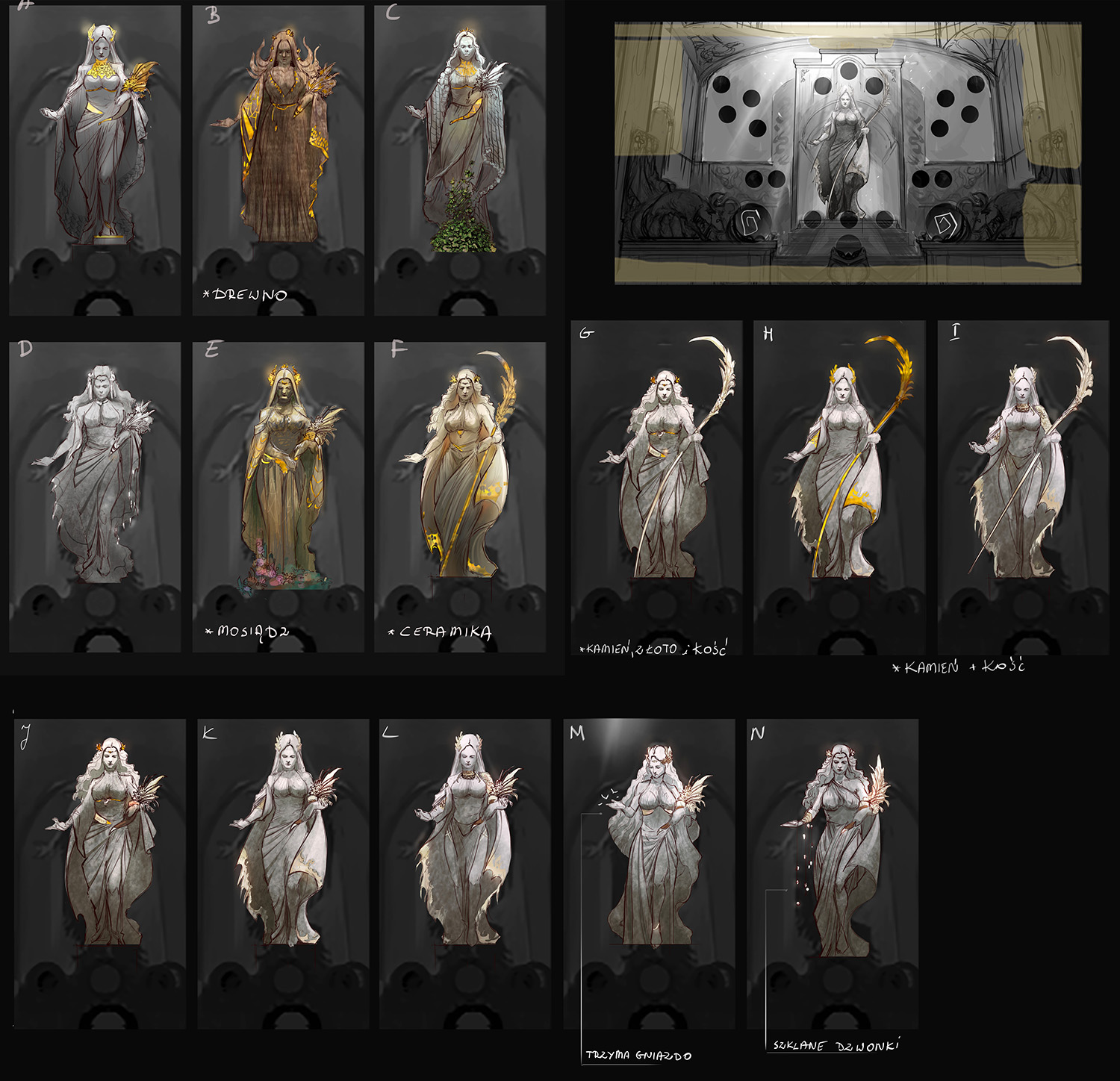 Here is an advanced concept art of the temple: 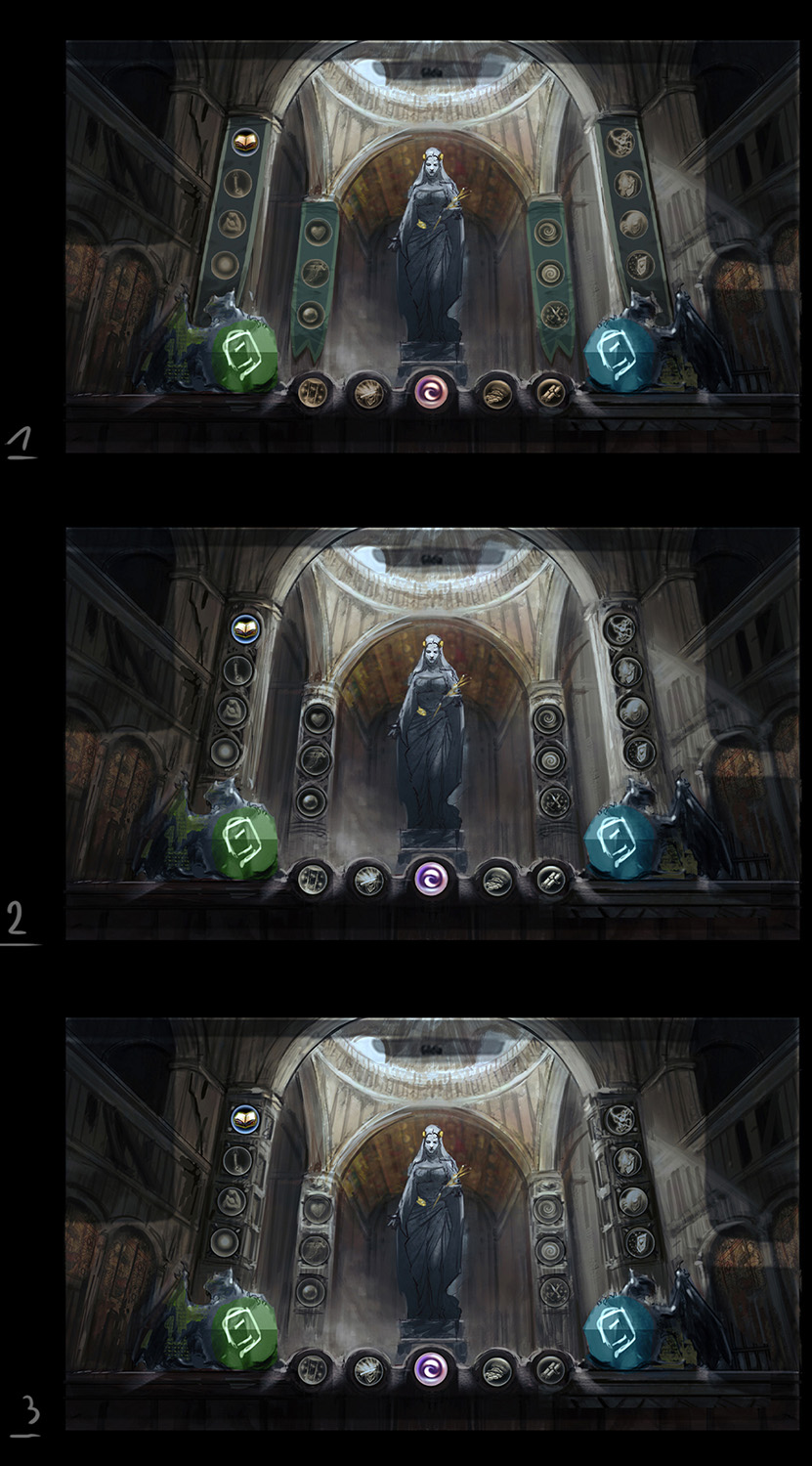 The next art shows the interior of the Teleportation Tower. When designing this building, we had to take into consideration the fact that more locations may be added in the future. We couldn’t just use a closed composition, we needed to make room for new places and options. Hence the floating mirrors. We also decided to make the interior more magical by changing a mundane arch into a real portal. 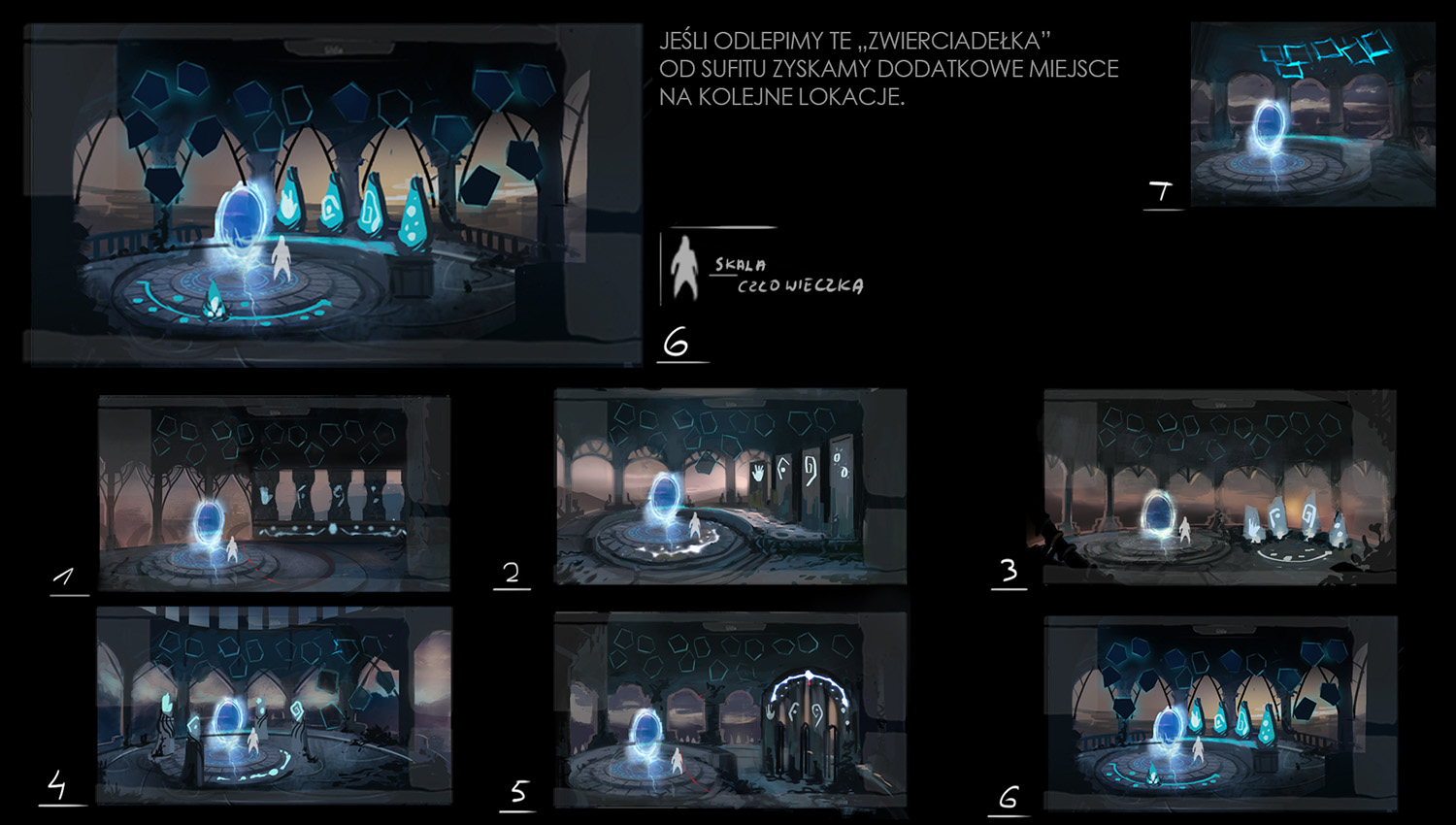 Pet enthusiast care very much about where their favorite animals live, so we decided to upgrade the Cages too. We got rid of the unused cages, added three new ones and renovated the whole thing. 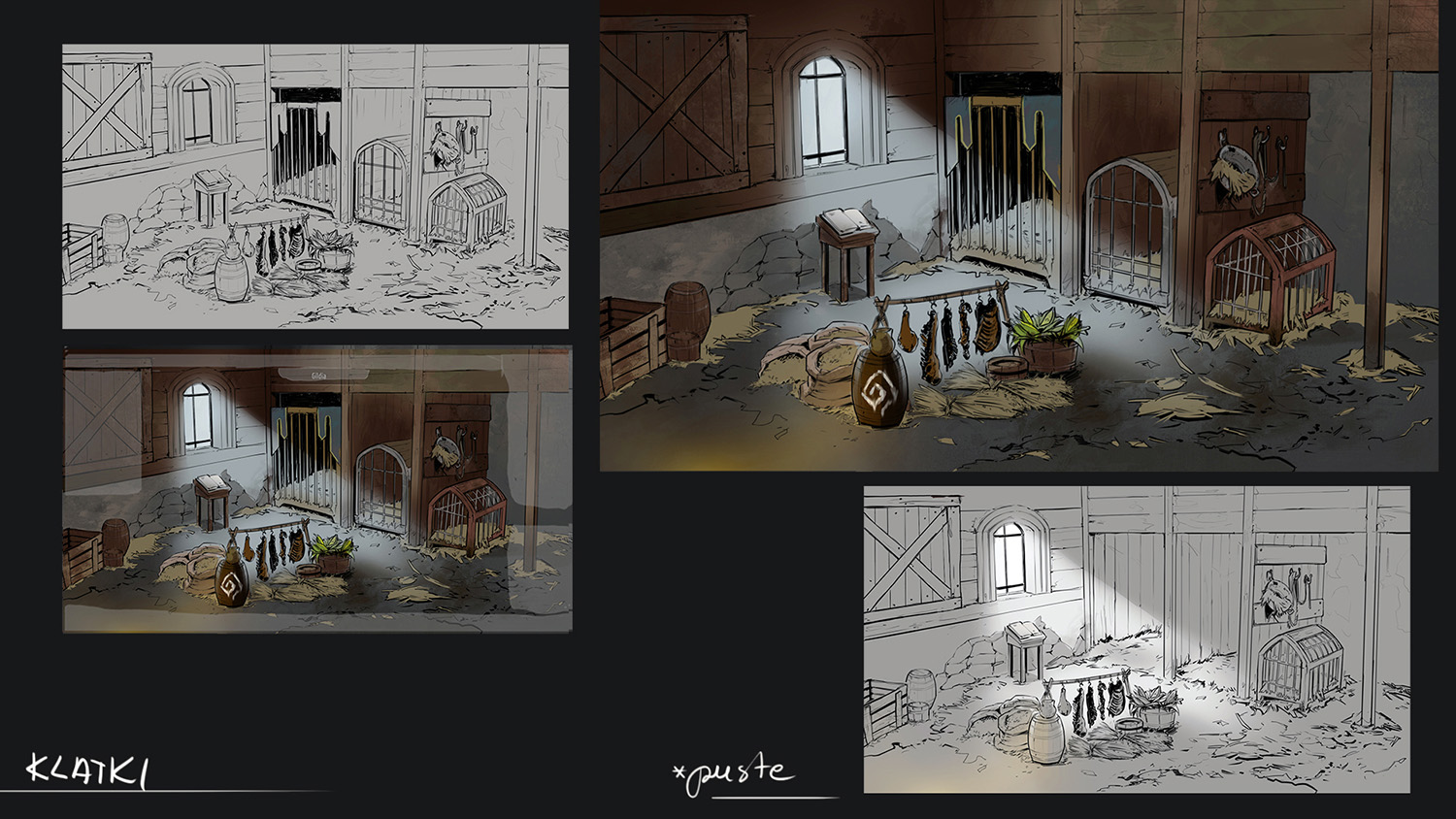 Lastly, the Deposit. The relatively new option to increase the size of the deposit proved to be quite problematic. Before the change, the logic was clear: small chest = low capacity, big chest = high capacity. This logic is gone: you can now put more items in a small chest than in whatever is below the trapdoor. 😉 In 3D we would like to hide their capacity a bit. There were some ideas based on playing with perspective or deposits as tunnels. 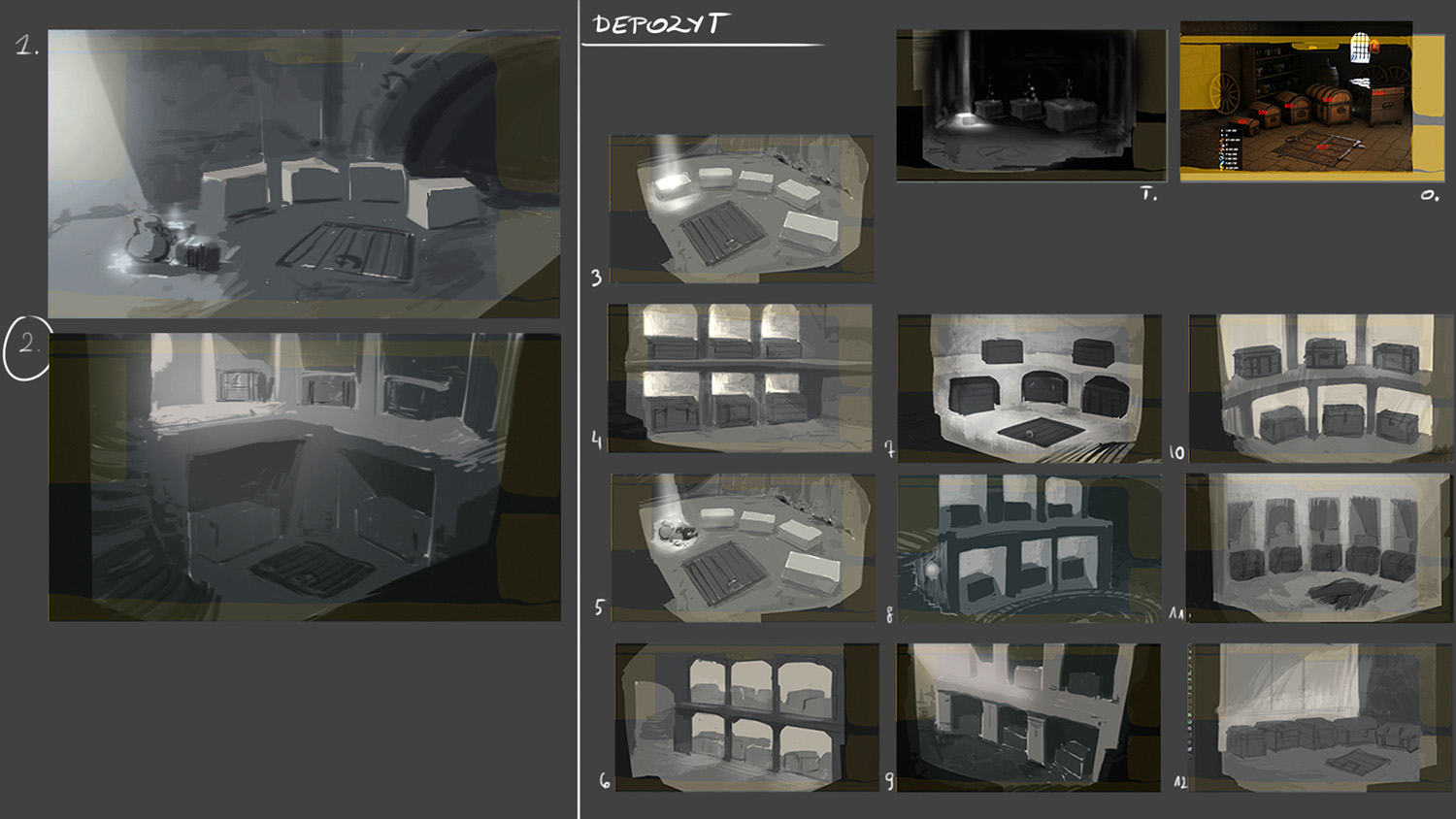 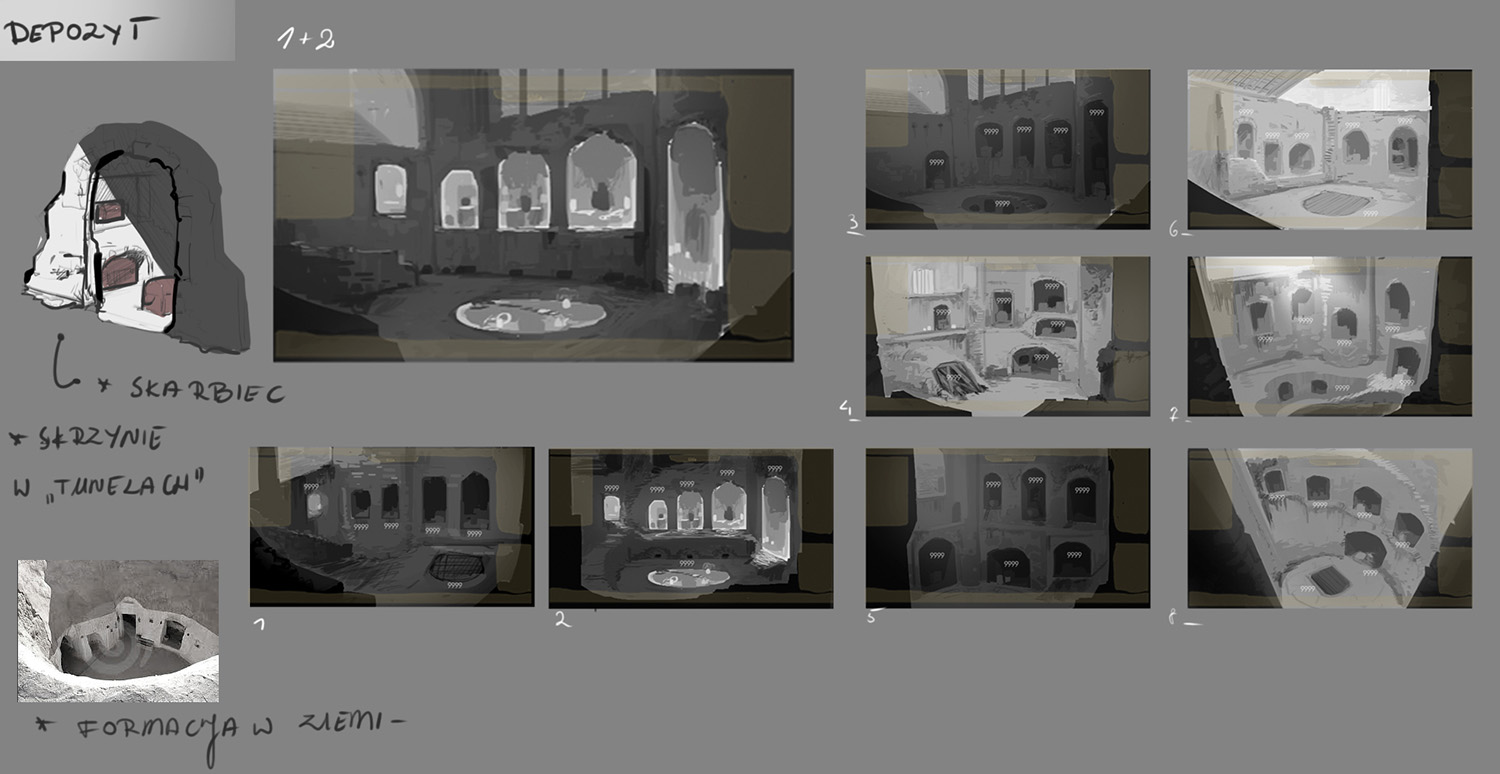 We’d like to emphasize that we want to make changes when you upgrade buildings much more visible on the inside. This aspect is very minimalistic in 2D – it simply adds new options. In 3D we want you to be able to see that the building becomes more beautiful, more ornate, and the quality of materials used to construct it is much better. We don’t know if this will be ready for the release but we’re creating concept art with this in mind.

Last but not least, soon some of you will receive our email survey. The goal of this survey is to deliver you the content you want to see. And if you fill it out carefully, there may be a reward waiting for you. 😉 Thank you for reading!