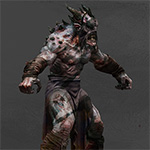 Holidays came and went. At least in theory because soon we’ll have a new kind of activity where you can get some prizes. We’re also going to present a summary of the event and give you some statistics. Apart from that, we’ve improved the launcher as more and more people will need to start using it since Flash is gone. The beginning of 2021 is a great opportunity to give you a report on Broken Ranks, especially that some of you were unhappy that there was no update in the previous post.

We hope that this year’s event let you fill your backpacks and deposits with presents (and sets) that gave you a lot of useful items after opening. Many players and their pets gained a lot of experience and when we say ‘a lot’ we really mean it. We’re happy you appreciate the strong points of the event but we’re also glad you give us feedback on the weaker elements.

Next year we’ll add additional spawners that will not compete with native spawners so that you get more event groups on maps.

You’ve also noticed that there were big gaps in terms of the power level of mobs for some level ranges. That’s why next year you’ll have groups of single Turoons and Secretaries. They’ll be present in Khemenak too. We’re also going to think some more about groups of single Santa’s Wives – some of you were happy, some of you wanted more of them. What’s it gonna be?

Red-nosed Elves weren’t properly counted for tasks at the lowest range. This has also been fixed. We’re also going to make event teams disappear in Beirn after the event.

We hope next year we’ll be able to give the total number of hats and stars dropped. We’re wondering how many you acquire during the event so… Let us know how many you’ve dropped!

We’re also thinking about what to do with trainer stones you get from presents. Next year we’re probably going to replace them with the items that weigh less but can be exchanged for trainer stones (same as Halloween).

If you have any suggestions, please let us know but keep it constructive. 😉 Now let’s to go the fun part – event statistics:

We’d like to thank all participants for the time and work they put in. Congratulations to the winners! And while we’re talking about contests… Don’t you think that the current name of our server (S1) is quite boring, bland and unimaginative? I think so too. That’s why we’re going to be naming our server soon! You’ll be able to choose from among the names of cities visible in the intro: Un, Talia, Kutnar, Duneb, Larkas and Usana. Or maybe you’d like to choose from among Utorian names (Orgub, Vilsor, Zoughar) too? Let us know in the comments!

Since Flash is largely gone now, many of you will want to use the client to enter the world of Taern. We’ve received many questions so let’s sum it all up:

The time for Voodoo has come and our previous ideas are still valid and will soon be tested. Here’s a preliminary list of changes:

As for the last point, we’ve had several ideas for the new ability, including:

After much deliberations, many calculations and tests, we’ve decided on a different approach. The new ability will transfer some of the received damage into mana, reducing it in the process. Thanks to this voodoos will have to decide if they want to: use one attack and some mana to increase survivability or use drain soul more or increase the amount of total mana they have. However, thanks to this new buff, they won’t have to use a shield. If this solution proves to be problematic, we’ll probably use one of our earlier ideas.

As far as graphics are concerned, 95% of all content available at release date is ready (282/297). The starting regions where the tests took place are fully implemented and tested (finalized): Trentis area, Castle area, Alaril and caves. Trifkin’s Island is also ready and closed. The following maps are mostly ready (we’re still finalizing FX): Khold Mountains together with Khemenak, Khold Forest together with Bear Cave, Orc Forest, Dmorther Massif (Ravine, Plateau). That’s all the content that we are planning to test but we’re likely going to expand this list by adding Dmorther Garrison – we are only missing 3 caves there and we are in the process of adding them (they are in a different scale than other maps). It turned out that we also need to do some lifting of the main storyline maps: slavers ship and a certain old, ugly island. We’re working on them right now.
To sum it all up: as far as map implementation goes, we’re almost ready to start public testing! 🙂 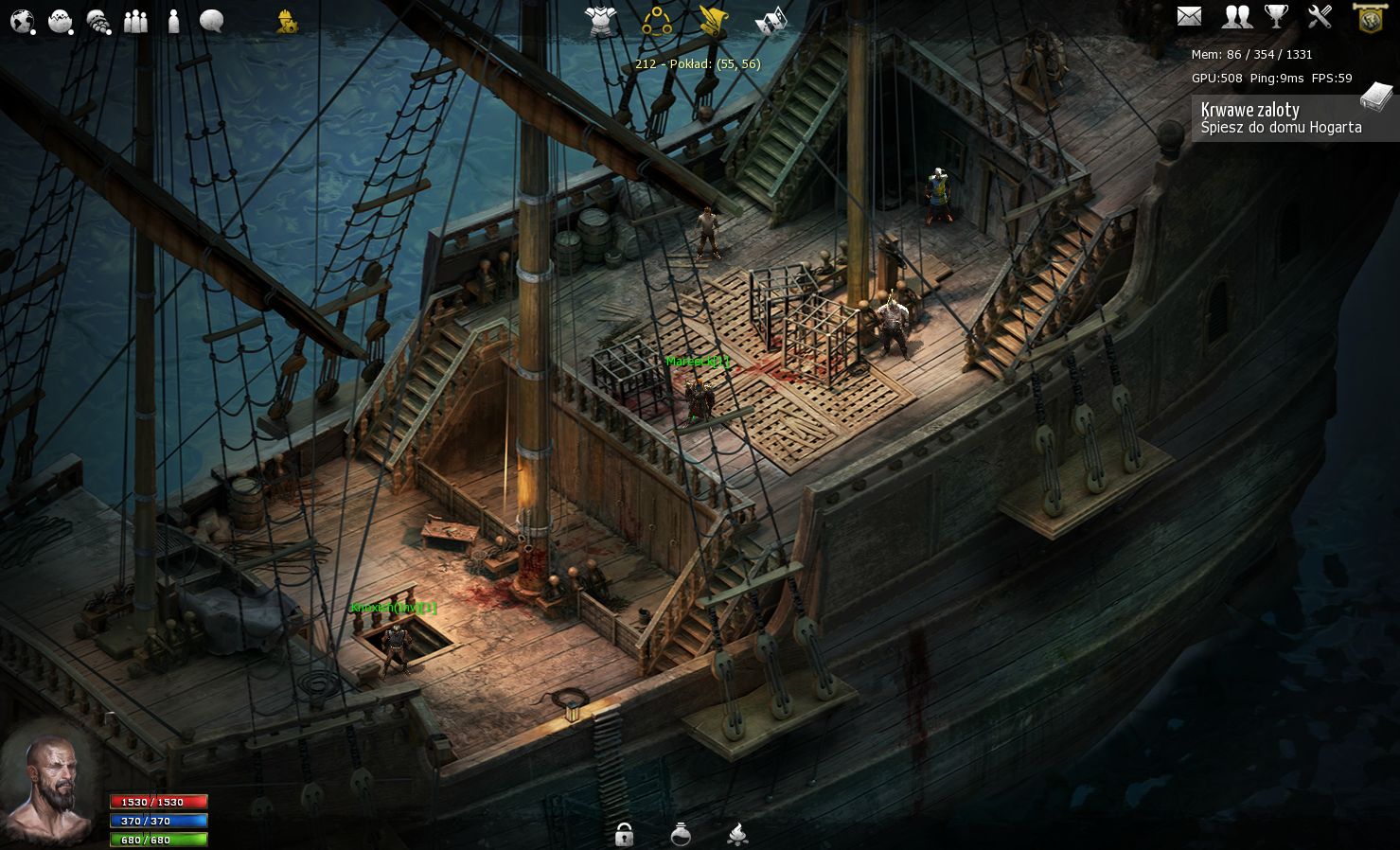 But what about all the other things?
Some maps, mostly due to problematic mob models or mechanics, were left, as we’ve mentioned before, on a reserve list. They may not be available on release date. These include the following instances: Valdarog (including the approach), Aqua Regis, Puppet Master and Castle Specter. Once our graphic designers finish all the things needed for beta tests and complete any necessary corrections, we’ll start working on the reserve list.

As for the Ice Lake and Beirn – these maps we’ve left for last. We’ll be finalizing them while earlier content is being tested.
Why are we dividing the work into stages? During public testing, you’ll create a new character from scratch. We’ll be focusing mostly on the mechanics, UI friendliness, combat visuals, combat tutorials, instance mechanics, quest friendliness, gaining experience, player communication, usage and features of the world map, etc. The aforementioned maps are high-level content and it’s simply unlikely to change much, at least as far as the listed issues are concerned. Checking how graphical elements are implemented (i.e. the graphics of maps, mobs, combat background, special effects) is a purely technical thing that we can evaluate on our own.

Going back to numbers – map graphics:

– Instances: 61/62
We only need a render (not a redesign) of the Vorling tomb in higher resolution.

– Houses and small interiors: 107/112
Khold interiors are done, we’re still missing some locations from the Icy Lake. We’re also working on Trentis hospital (instead of a plain picture). Concept art is ready but we’re waiting for 3d graphic designers to be available. Here’s the final concept art as seen in the game: 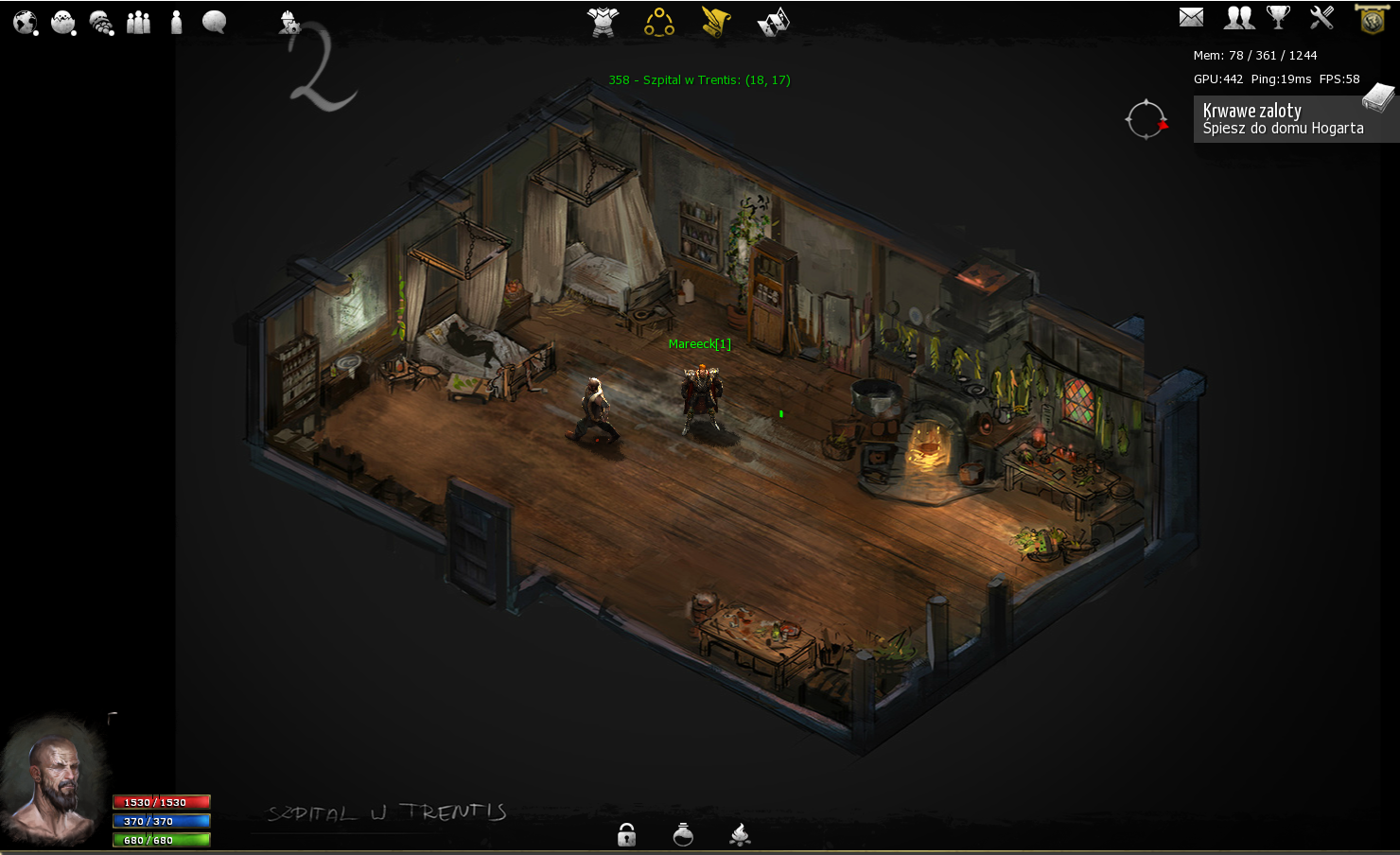 – Smaller maps: 35/38
We’ve been missing Lower Khemenak, which is now finished, but in the meantime some main storyline maps were added: slavers ship (3 maps – 1 is ready) and the island (1 maps). 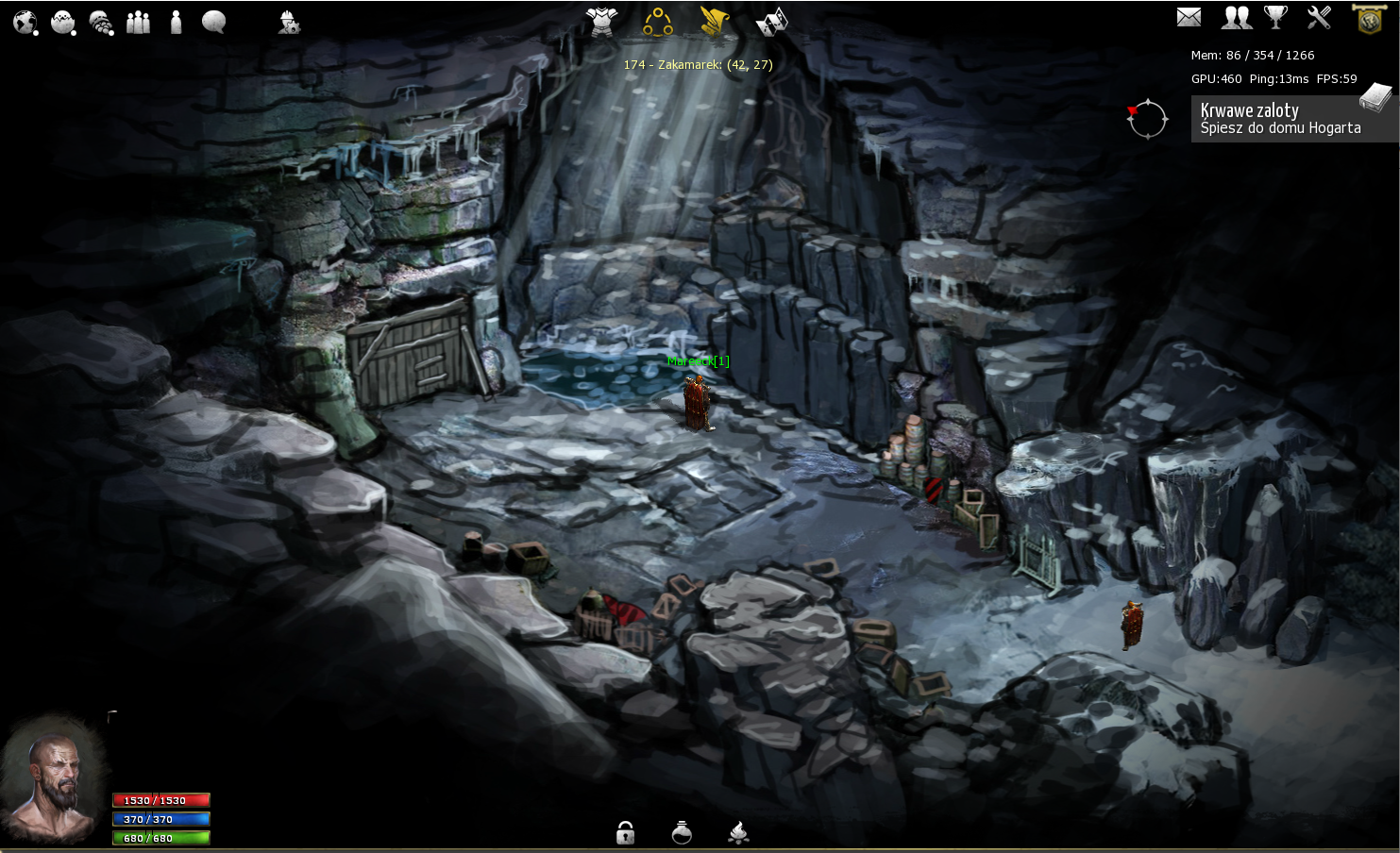 – Prologue maps: 4/6
We’re implementing the feedback for the renders of the last two main prologue locations.

Almost everything is ready. The only thing we still need to add is the premium window view. It’s the least important one, especially for testing, so we’ve left it for last. At the moment it’s completely disabled. 😉 Currently we are working on improving our UI. We’ve implemented the feedback given to us during tests, e.g. better indicators when moving between maps, marking NPCs on maps, marking aggressive mobs, improving friendliness of some windows (skills, equipment, dialogs) and also battle UI. We’re halfway there. All that’s left will not impede future tests. 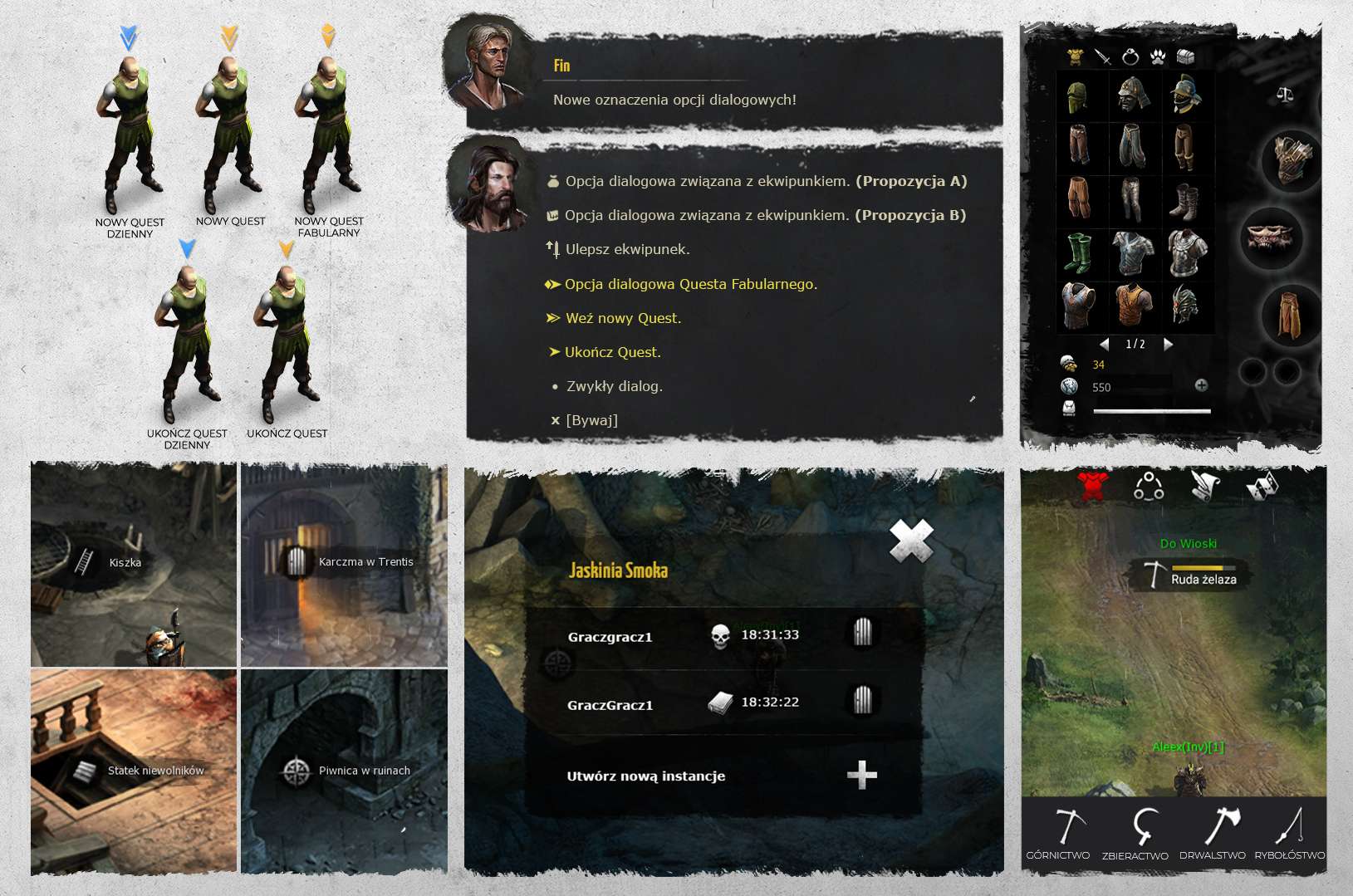 The last stage will be going through all of the UI to finalize the graphics – we haven’t begun this yet.

For several months we’ve been doing a thorough analysis of all the models in the game to make final adjustments. We’ve also found some models we previously missed. There are so many unique mobs in Taern that we simply forgot about some of them. 😉 What’s left are the most technically problematic mobs. We’ve left them for last. 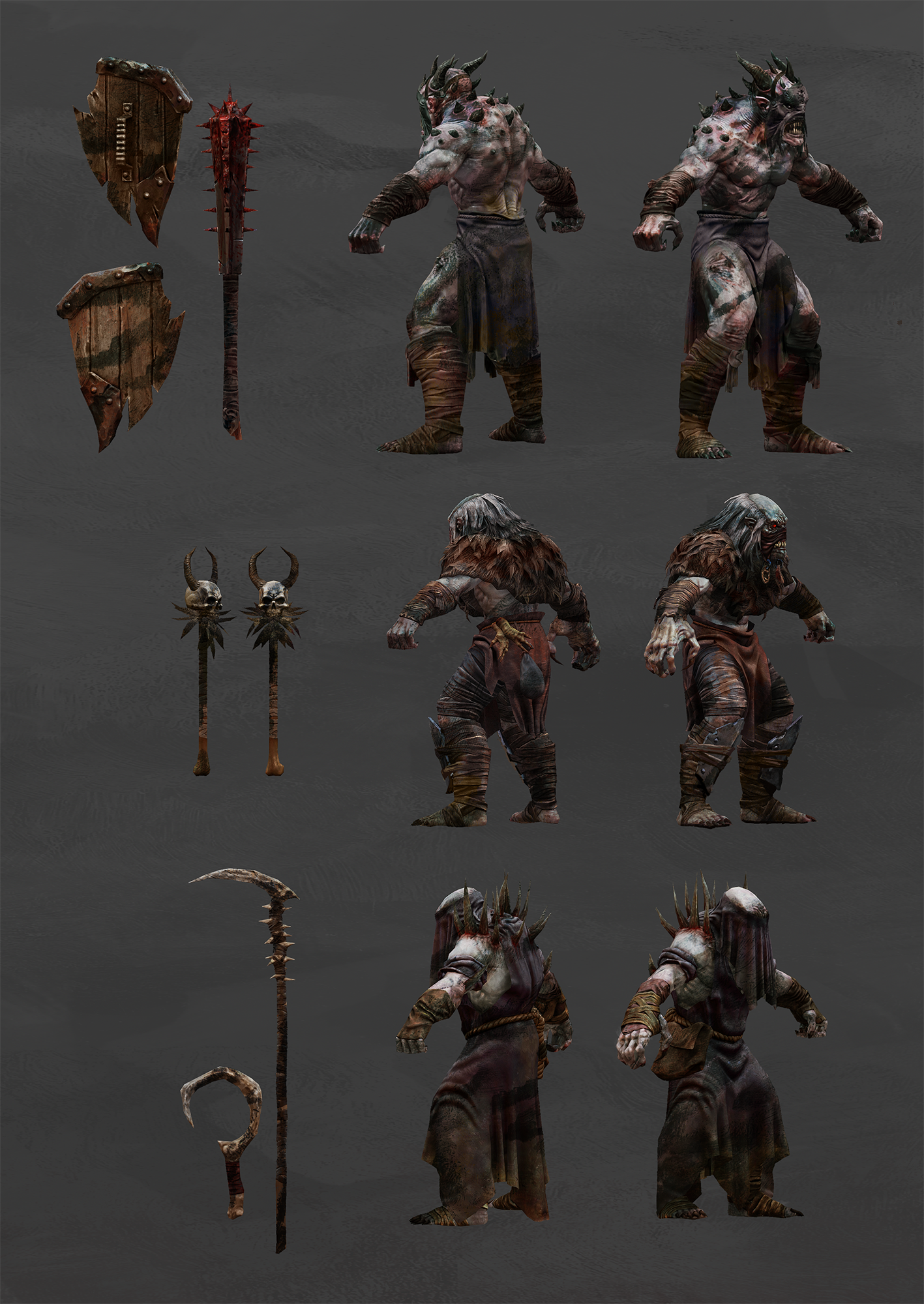 There’s more and more to do as we add new quests and convert old ones. At the moment we have more than 400 unique NPC models. We’ll continue creating new models until the release.

At the moment we’re missing only Nidhogg’s background. Everything else is ready. In the meantime, we’ve added 2 new backgrounds for the prologue and improved some old ones that stood out the most.

Animations are our Achilles’ heel. Fortunately we can see a light in the tunnel. Almost everything in BR is moving quite nicely. We’ve spent the last couple of months on improving player animations.

BR will have brand new NPC and player portraits (since it’s a lot of work, some portraits may still be old after the release). We’ve made our own editor our graphic designers use to create new avatars. We’re also trying to make the avatars move a little. The effects are promising but we’re not sure if we’re going to implement it yet.

This is something we’ve left for last. If there’s work done here, you know BR is almost ready 😉

We’re currently working on converting the most important quests in the game – the main storyline. We’ve been waiting so long with this to make sure all the required locations, models and animations are ready. When we started working, it turned out that we missed some things but only they’re minor. While doing this, we’re changing the plot in places where the old quests don’t really fit with the new design of areas. For example, once Trentis and Billy’s village were much smaller and had fewer inhabitants. With larger maps and more crowded locations, some mechanics have become more difficult and less satisfying. We’re adding dynamic scenes and mechanics to many moments to make them even more memorable and interesting. Side quests are getting a lot of love too. 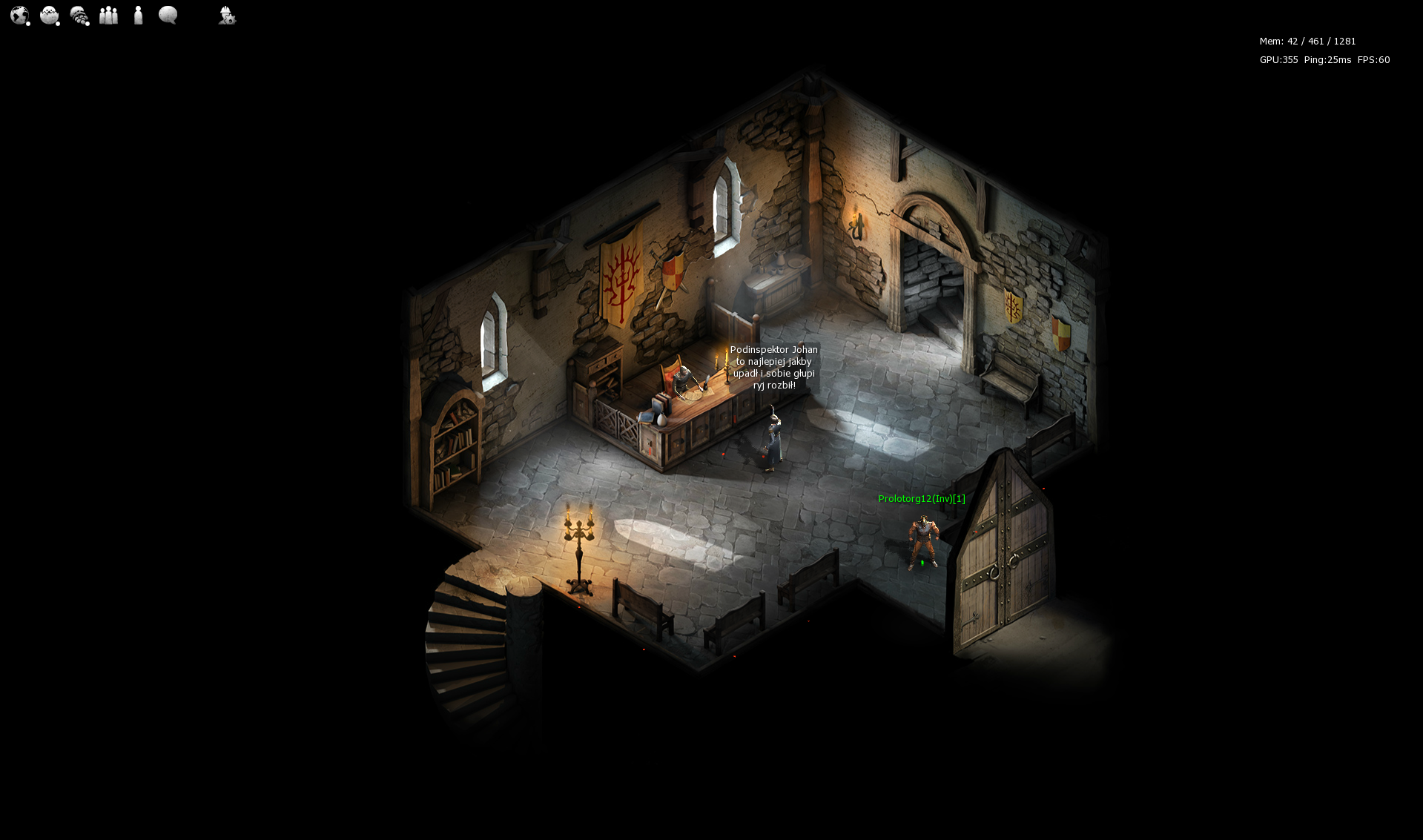 “I hope junior inspector Johan falls on his stupid face.”

All Trentis and Alaril quests have been converted and are undergoing tests. Khold Forest and Khemenak are still missing a couple of quests (because of the lack of khold animations which have been finalized today).

The main storyline has 3 out of 15 quests ready (including one completely new quest).

We’re missing mostly the quasarite island and Talhal’s ship. Quasarite island is an interesting specimen because it has been redesigned from ground up to make space for all the fun quests mechanics that take place there. 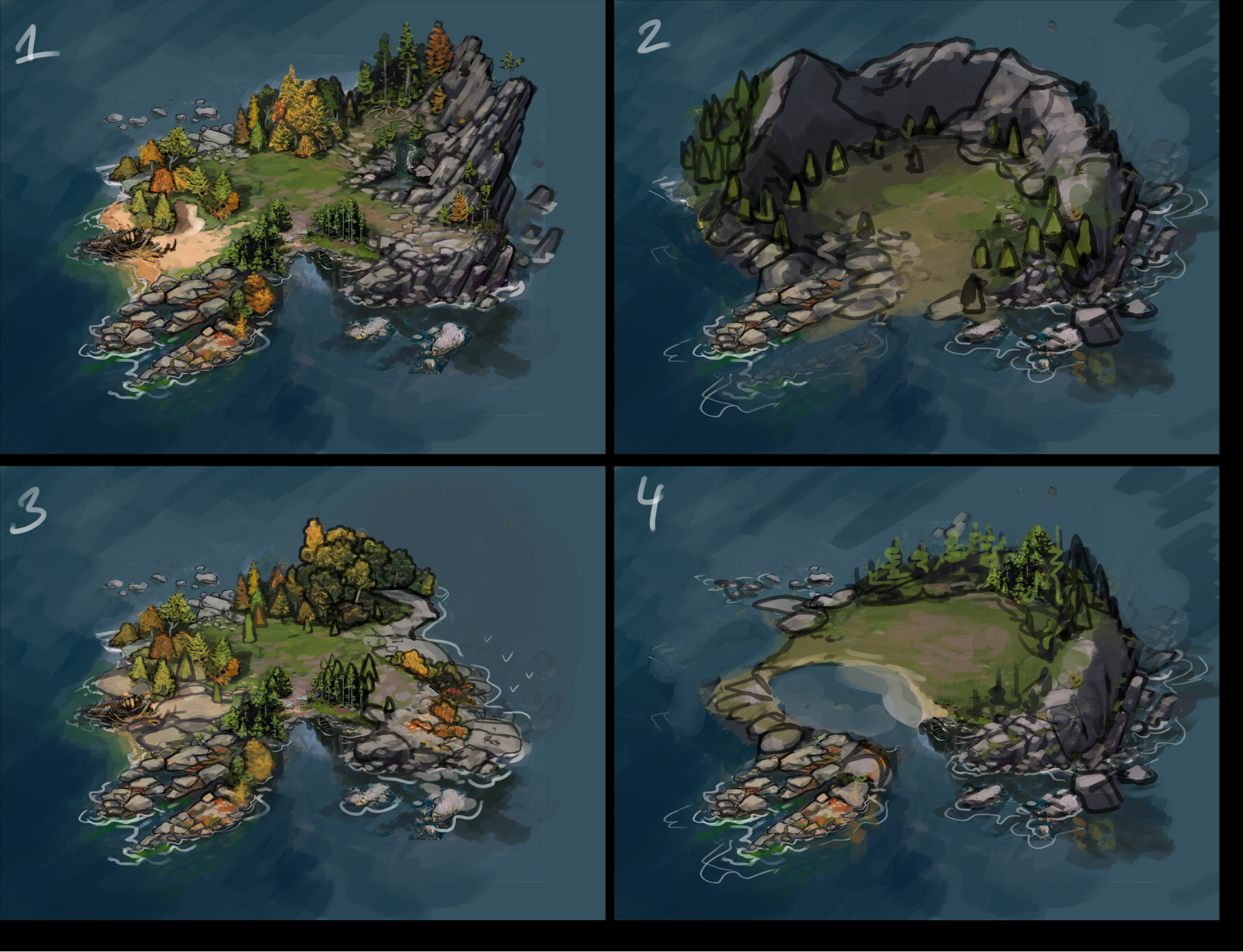 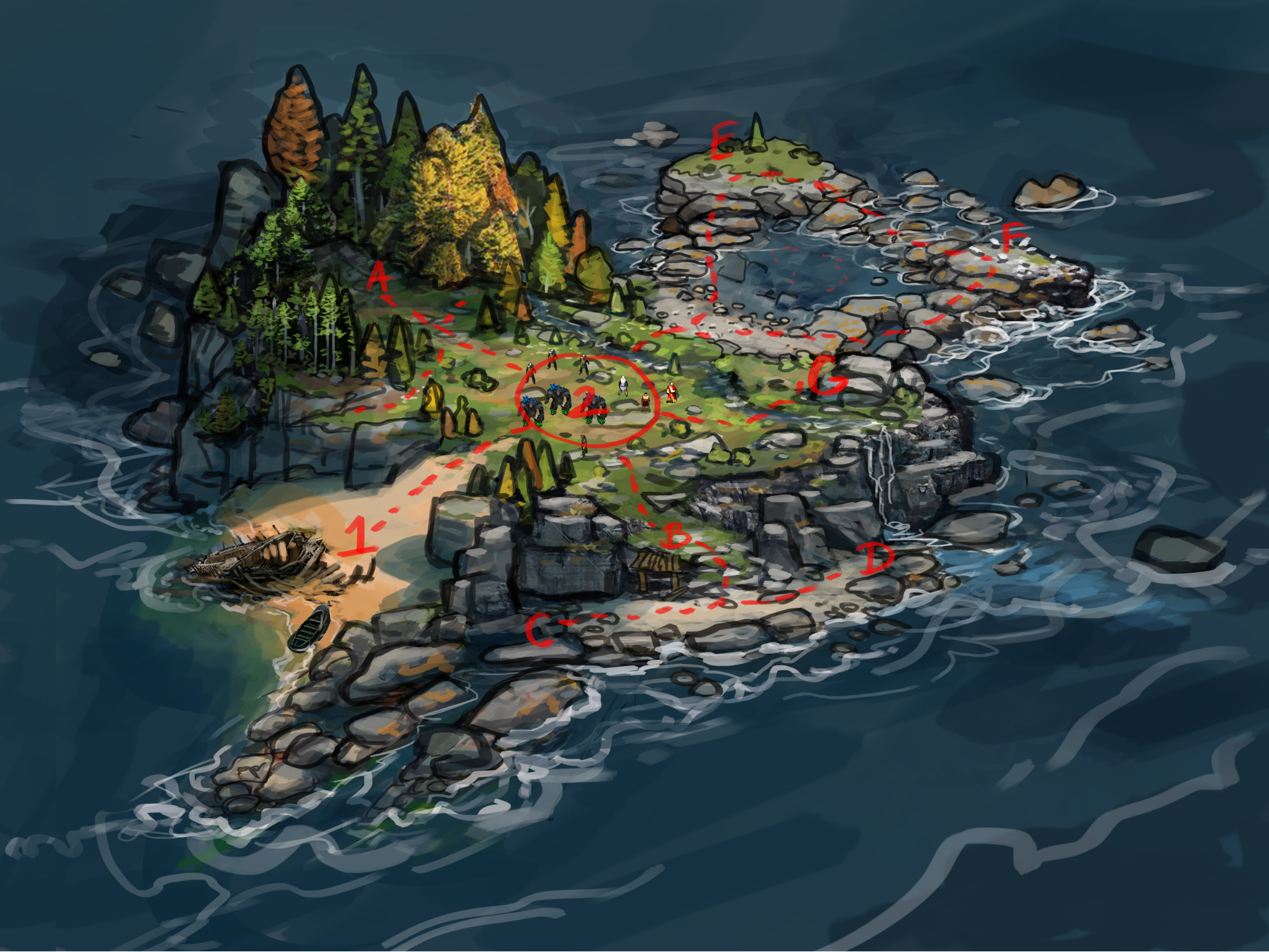 Converting quests to Broken Ranks is really fascinating because we can retell a known story using an arsenal of new means of expression. We hope that you’ll be as fascinated to rediscover them in their new garments.

2 thoughts on “Holiday event, voodoo changes at last, news from the world of BR – Currently working on… e. 211”