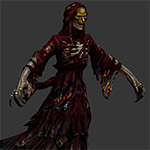 As the main dish, we’d like to inform you that Broken Ranks beta tests are very close. Indeed, we have already sent first invitations to the Closed Beta! Also, if you are having trouble planning the development of your character, today’s post will tell you about a very useful tool for analyzing builds and combinations. Apart from that, we have a bunch of statistics for you. And you should also check out what we are working on in BR itself.

The most important thing is we’ve entered the first stage of the Closed Beta. But first things first.

In the previous posts we told you about the results of Alpha tests and the fixes that we needed to implement and check. We can now say that every problem we listed there has been fixed and we are in the process of testing the solutions. And then there’ll be the final touches of course. 😉

We are currently working on (and we would like to test this thoroughly) the new features of the world map. To make the exploration aspect of Broken Ranks a bit more lively and also to make it easier to navigate the game world, we’ve added a table of contents to the map. We’ve divided the game world into a couple of zones. For each of them, we’ve chosen various types of activities and categorized them so that they are shown in the form of progress bars on the map. Main storyline quests, sidequests, bosses, champions – you’ll see a list of everything you can do in a particular zone. You’ll be able to “collect” these things – your overall progress will be shown on the progress bars but you’ll also be able to see how much of a zone and the world you have explored. Below is an image showing you how it’s going to look (keep in minds that it’s still work in progress): 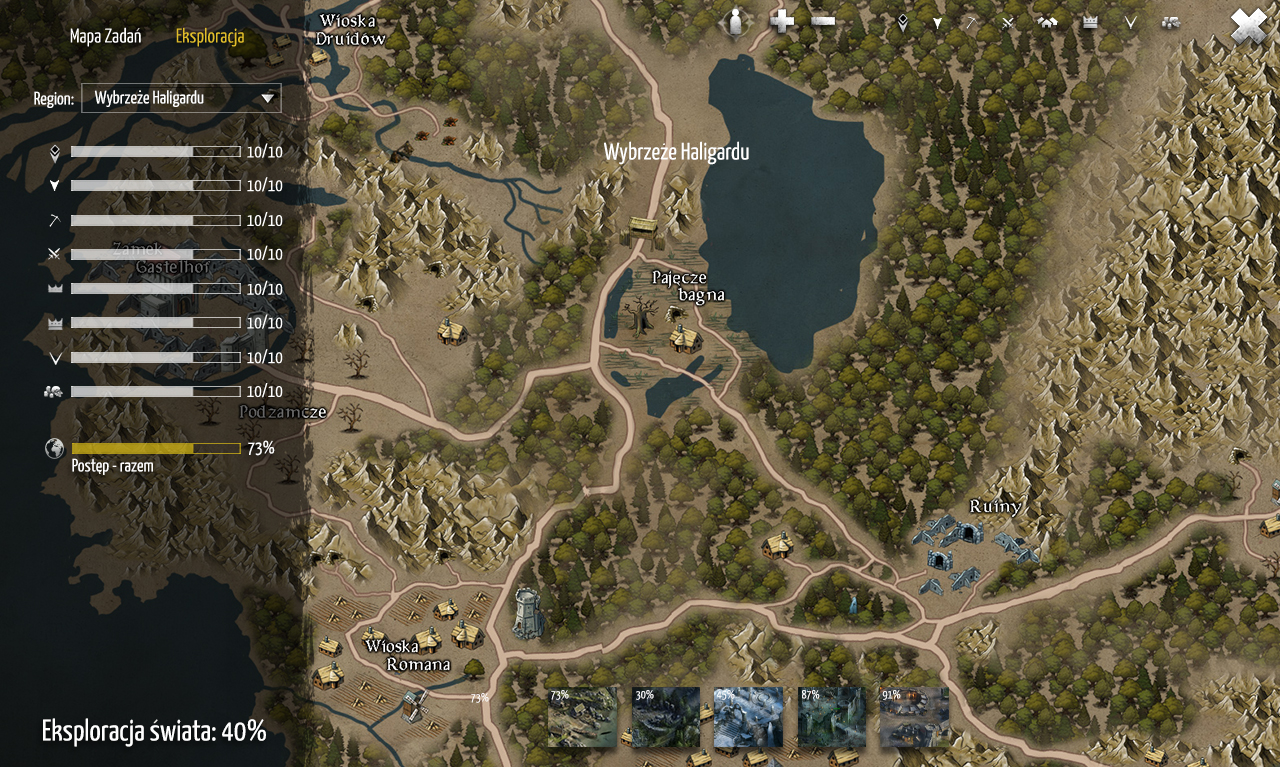 While doing some finishing touches, we are also implementing quality of life improvements. E.g. NPCs will now have icons over their heads that will inform you that they have a task, can sell you something or can give you a quest. 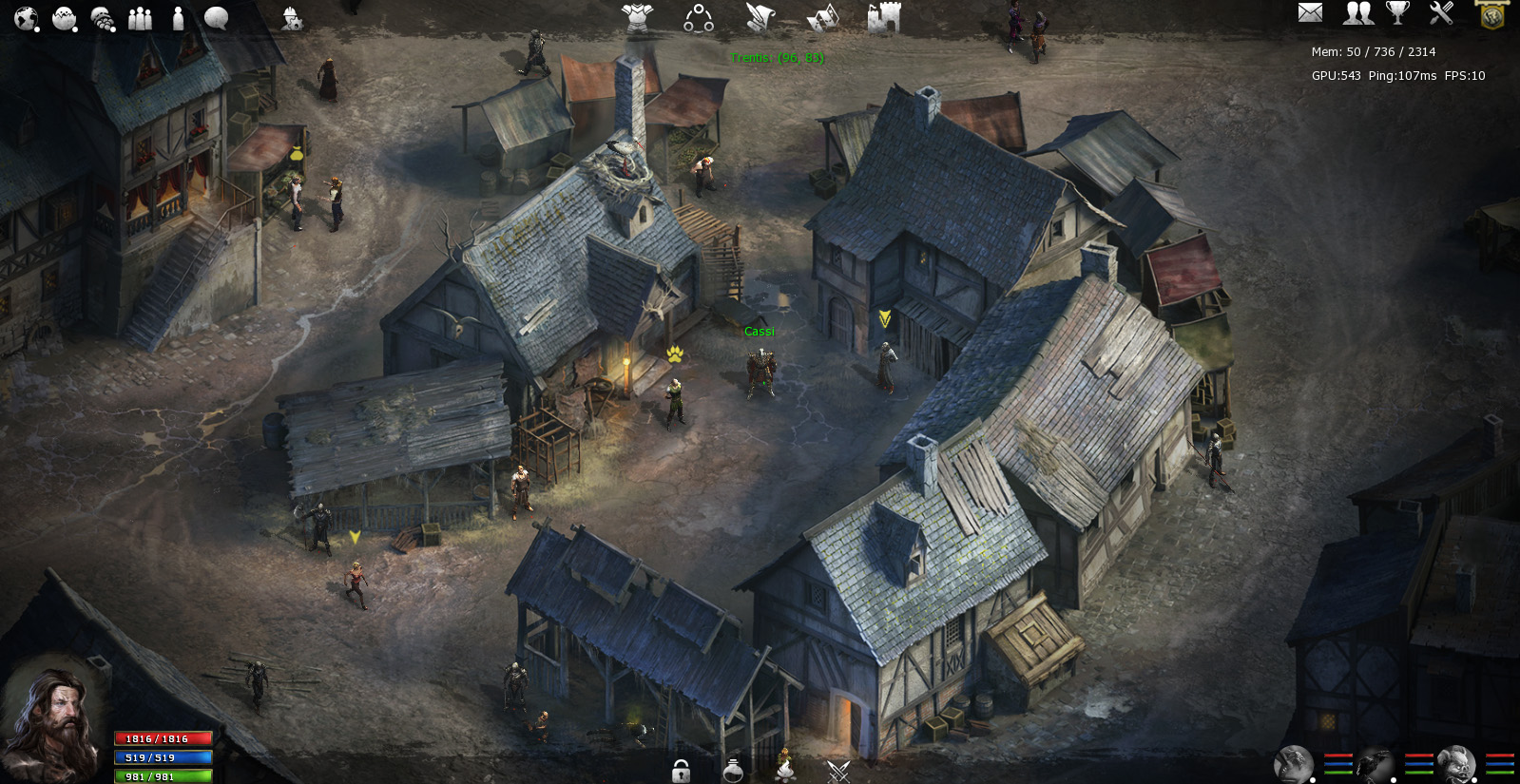 We are also working on improving current features, e.g. you’ve already seen that in BR the aggression, strength and difficulty of mobs will be shown on the map. We’ve changed this feature to be less invasive: 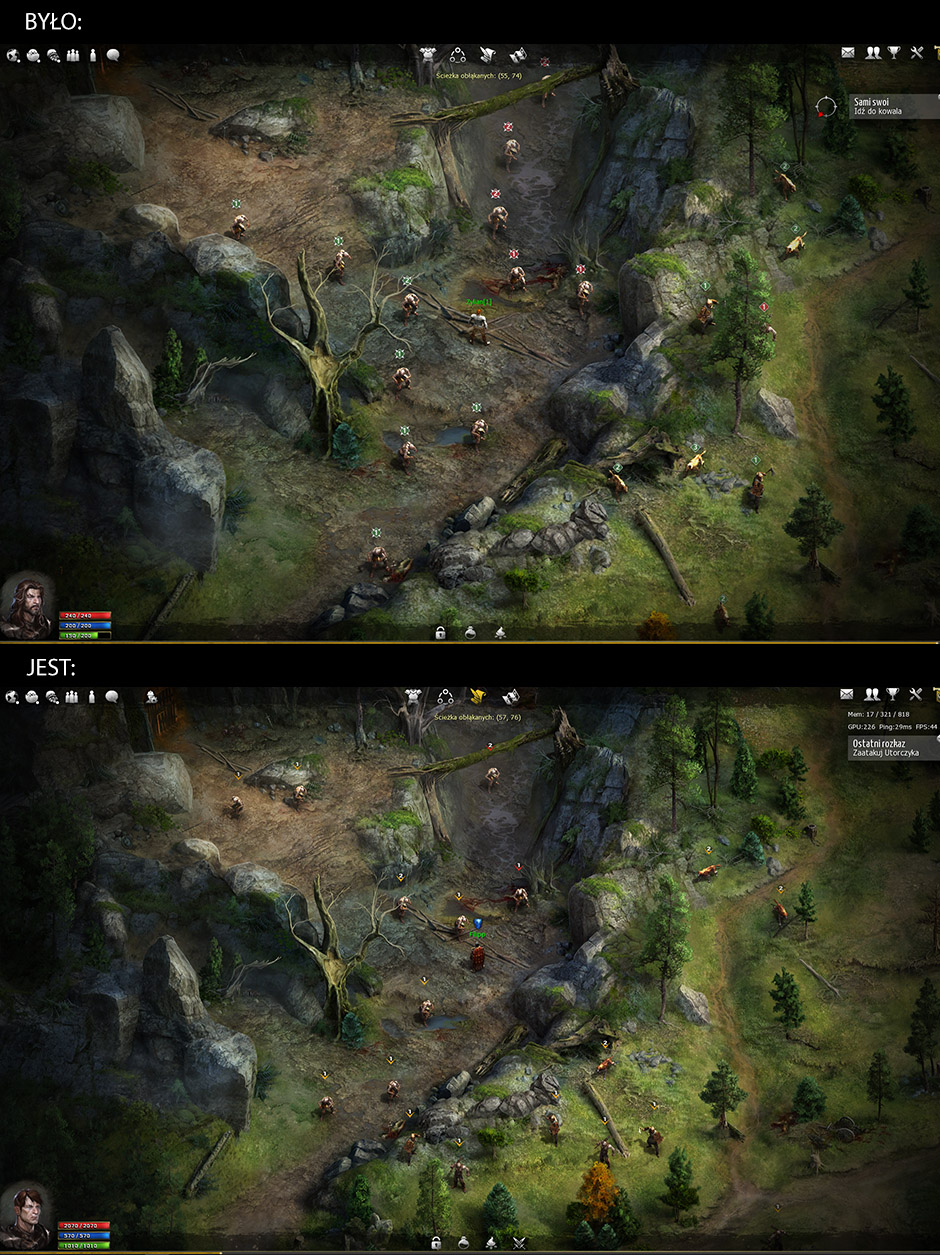 The game production wheels are turning. Quests are tested, fixed, tested, fixed. We want them ready for stage one of the Closed Beta.
Graphics – we’ve been adding champions, filling holes and improving some uglier models. We are adding assets to quests (various mechanisms, avatars, items, etc.). We’re working on skill FX.
Here are the graphics of 2 champions we’ve recently completed – Drowned Dead and Popyel. 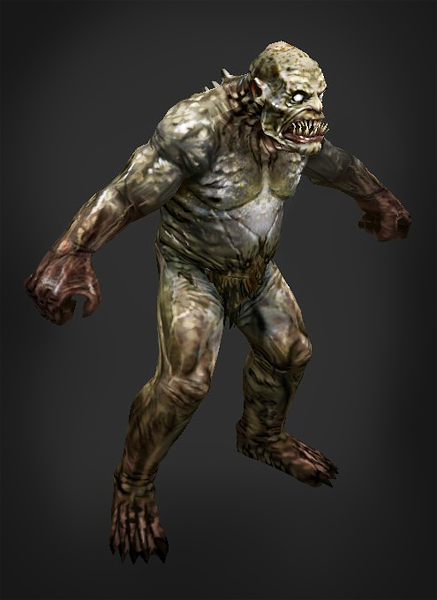 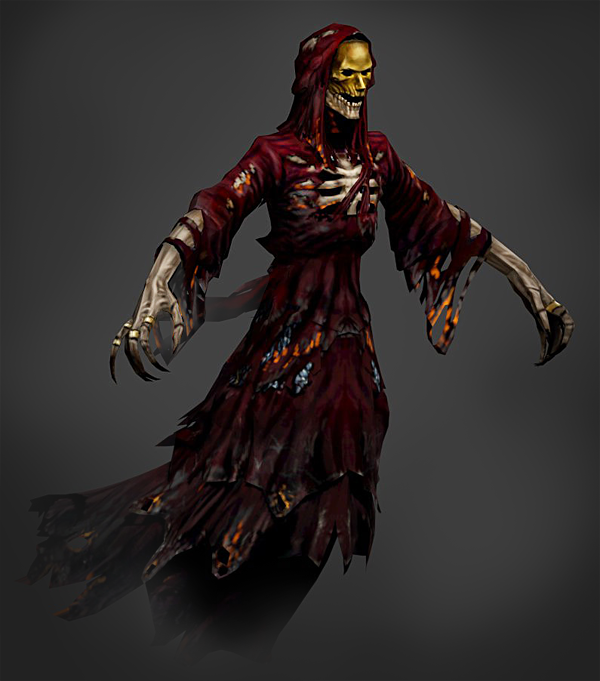 Everything we do, apart from the things we need to do for the release :),  is done to let us start beta testing.
So let’s go back to the main dish:

In the previous post we announced that we started Closed Alpha tests and were preparing for Closed Beta which should start in the middle of March. We are happy to say everything is going as planned and there were no unpleasant surprises. That’s why on March 15th we will be launching Closed Beta I – the most closed part of Closed Beta.

Here we would like to tell you that Closed Beta will be divided into three stages meant for different groups of players with varying experience and perspective. As we’ve already stated we want to reconcile the habits of old players with the expectations of new ones. During tests we are going to focus on the beginning of the game to optimize testing duration. The start of the game includes almost all of the solutions that you’ll also encounter later.

Yesterday we sent invitations to people who had gained access to the Closed Beta as a reward for helping us develop the game so far. After signing an NDA, they’ll be able to take part in testing. Their task will be to create new characters from scratch and play through the initial zones of Broken Ranks, report bugs, errors and make suggestions. In short: provide feedback. The tests will last 2 weeks. They will be divided into group and individual tests. Servers will be enabled at set hours and the testers will have to (apart from enjoying the game) fill out special forms to let us know what they think.

So it’s going to look just like Closed Alpha but with more players. The goal of this part of the tests (apart from finding bugs and checking server performance) will be to check the new features and quality of life improvements. We’ll be testing the new prologue, tutorials, new features of the interface. We’ll be checking all the changes in gameplay introduced with Closed Alpha like new character development balance. Group tests will be important too – we’ll be checking how fun it is to join a party.

After 2 weeks the server will close and we’ll start analyzing and fixing things. Once this is done stage 2 will follow. We’ll invite less experienced, fresh players to join us in Closed Beta II. They will have their unique view of the game and they’ll let us see Broken Ranks from a different perspective. We’ll also invite people with Closed Beta codes and our non-Polish speaking players. We’d very much like to make our audience bigger so feedback from people outside of Poland will be very valuable. Closed Beta II will last about 2 weeks.

In the third stage of the Closed Beta we’re going to invite all types of players, from newbies through experienced ones to the most hardcore Taernians. Then we’re going to draw conclusions, make changes and launch the long-awaited Open Beta. But that’s a tale for another time 😉

We started testing another iteration of VD changes. It consisted of:

The testers were tasked with checking the implemented changes and the usefulness of mana shield on the following bosses: Castle Specter, Mantis, Ice bosses, Htaga, Greater Hawk, Morana and Tarul. We also asked them to change their builds so that they have more mana. The previous iteration of the new ability had been met with skepticism but this time we overdid it in the other direction. Simply put – VD’s survivability increased too much. 😉 However, the tests proved to both us and the testers that mana shield could be useful so we’re going to continue testing it with adjusted values. The other changes were well received but our testers noted that Drain Soul may be problematic in PvP as you can drain your opponent’s mana too quickly. There were also some other minor suggestions that we’re going to take into account.

During the next round of tests we’ll be checking the following changes:

The tests will begin tomorrow. Once they are completed, we’ll be able to evaluate how much more work is needed and start preparing for an update.

As some of you may know (since about 200 people use this website daily) we’ve developed a set of tools that can make playing Taern a little easier by letting you plan your character’s development.  The tools are collectively called Taern Toolbox and can be found here. There are only three available at the moment but the website will be expanded in the future and the current tools will be developed further.

The most important of the tools is the build calculator. It’ll let you check how many ability and attribute points you’ll have at each level and also let you spend them. But that’s not all – you can also add equipment to your character to see how it’ll look fully geared. Items can be upgraded, created (to simulate shop items) and leveled up.

The only thing you need to do is choose the class and level for which you want to create your build. Here’s an example build (attributes and items tab view): 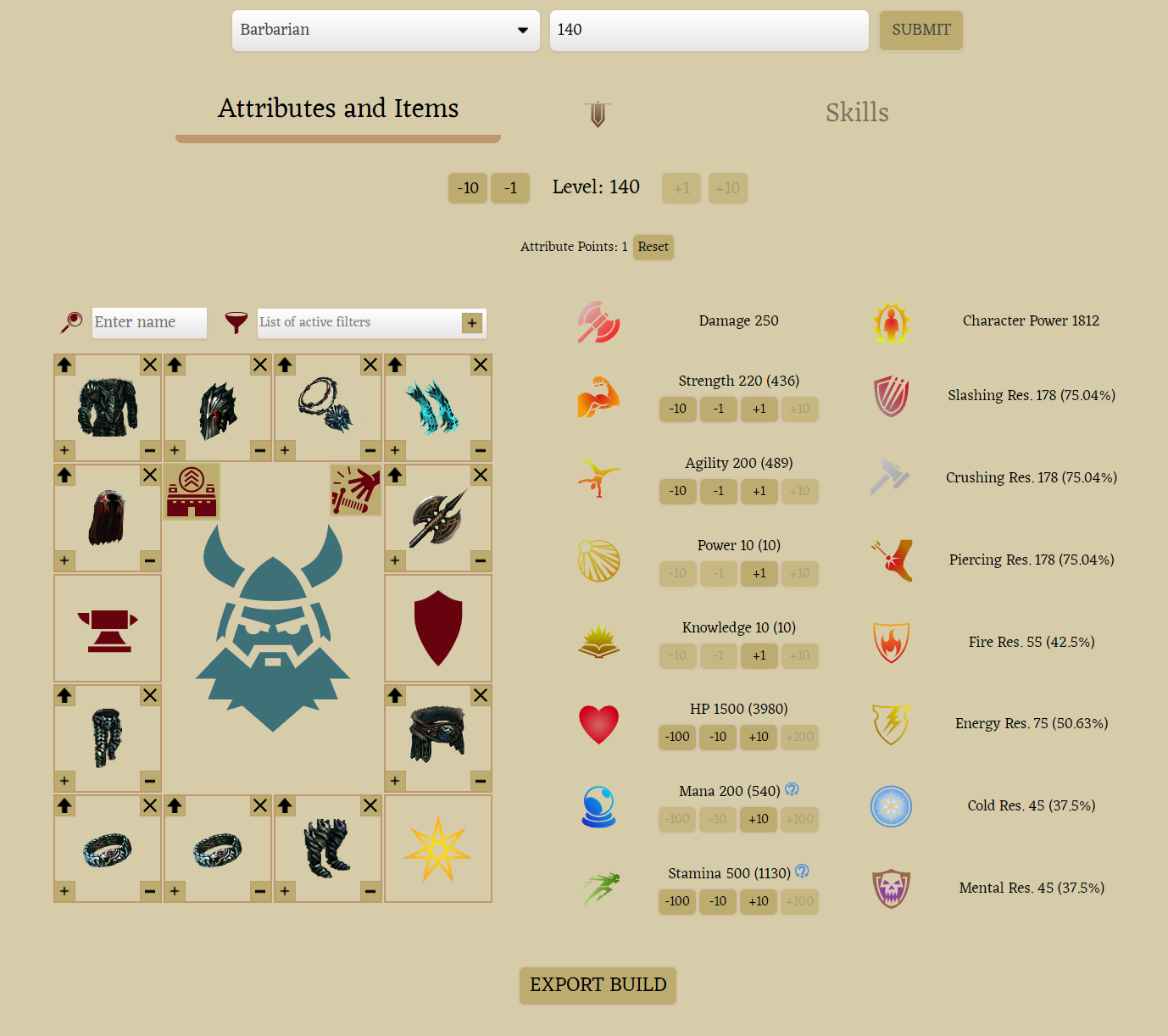 Recently we’ve added a new feature that allows you to turn on guild buffs.

However, the calculator can do much more. With the last update we added tables from wiki for all the skills (unfortunately skill descriptions are not available in English but this is something we’re working on). Apart from that, the calculator will tell you how many APs you need to cast a buff (and how much knowledge you need to cast it for less) and also how much damage/healing your abilities do. Here are two examples: 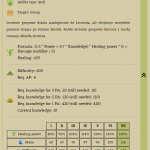 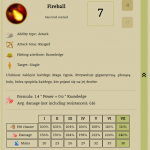 In the next update we’re planning to add exact damage calculations that take into account resistances. We’ll also add a buff slot where you’ll be able to choose what buffs have been cast on your character. Thanks to this you’ll be able to calculate how much damage you can deal with Power of Unity up.

In addition to that you no longer need to trouble yourselves with taking a screenshot of your character to share your build with others. Why? After you create your build, you can share it with others! How? All you need to do is click the export button at the bottom of the page:

After you click it, you’ll get a link to your build and the only thing you need to do is send it to your friends!

The other two tools are the knowledge calculator for people who don’t want to create a whole build and just need information on how much AP they need to cast their buff and the items list that doesn’t contain all the information you may need (like weapon type, rank, source) but we’re planning to add them in the future. Currently you can filter items by attributes and search by name.

The tools are not perfect of course so if you have any comments/requests/threats/complaints, you can post them on the forum in this topic.

And here are also some calculator usage stats for the first month of its existence:

Top10 most clicked equipment slots (you’ve clicked them more than 180,000 times in total!):

And that’s all folks. See you later! 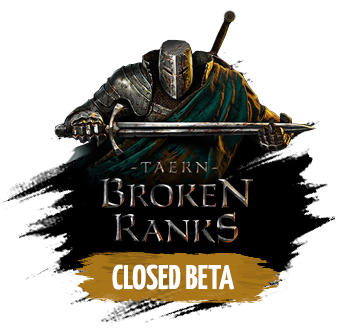